Will Artificial Intelligence Lead to Breakthroughs in the Steel Industry?

POSCO has been named the world’s most competitive steelmaker for eight years in a row. With the focus to provide advanced steel solutions as well as maximize its non-steel sectors, POSCO has become a leader in innovating manufacturing processes. Since the beginning of last year, POSCO has been expanding its investments in smart factories by incorporating advanced artificial intelligence (AI) and IoT technologies into its manufacturing processes.

With the emergence of the 4th industrial revolution as a hot topic of the world economy, AI is expected to drive manufacturing innovation by providing breakthroughs in smart factories.

In his recent POSCO Issue Report, Kim Ho-In, a senior researcher at POSRI, examined what innovations AI can bring to the upgrowth of smart factories, and identified key issues related to such technological introductions.

Kim looked at how AI will provide breakthroughs in areas of manufacturing, such as preventive system maintenance, process control, expert process control and robot automation, and how AI  will make smart factories more efficient, less wasteful and more productive.

Traditional stock, inventory and statistical analysis provided insufficient information for preventing factory defaults, and made certain failures inevitable. With AI, however, factories can predict quality deficiency, gather and analyze complex data and improve equipment reliability. Also, by integrating such intelligence with robots, there are now self-learning, versatile beings that can automatically overhaul and optimize system defaults.

Thus the ability to self-teach, analyze and create will lead to a more comprehensive statistical analysis and achieve positive results in preventive maintenance.

The Right Kind of Smart

The different innovative tools in smart factories, however, may have distinct values depending on its application for the industry in question, so while such technological advances may be a breakthrough for manufacturing, companies must apply the tools that are most effective for their field and industry.

AI that can self-teach, analyze and create in a smart factory

In the assembly process industries, customizing production, cutting labor costs and responding to the fast life cycle of products are the major areas for innovation. AI applications like robot automation can guarantee positive results because many production processes can be replaced with robots, resulting in minimized labor costs.

In the process equipment industries, however, improving productivity through optimal control of core processes, controlling the linkage between processes and maintaining the facility are the major issues. The loss of data can be extremely critical in the case of a core facility failure, so preventive equipment maintenance would have a greater impact than robot automation.

The investment size and outcome value for implementation and innovation of smart factories will differ by industry. Thus it is necessary to build up strategies on technologies that are most suitable for each required field.

Recently, the world’s fifth largest blast furnace located in Pohang Works, went through major renovations to “go smart”. The Pohang Blast Furnace No.3 was first fired up in 1978 with an internal volume of 3795㎥, and was repaired in 1989, 2006 and finally in 2017, when it leaped toward POSCO’s vision of “smartization”.

After a 102-day repair period, the furnace volume expanded to 5600㎥, and the site is now fully equipped with AI to precisely monitor the condition of the blast furnace. 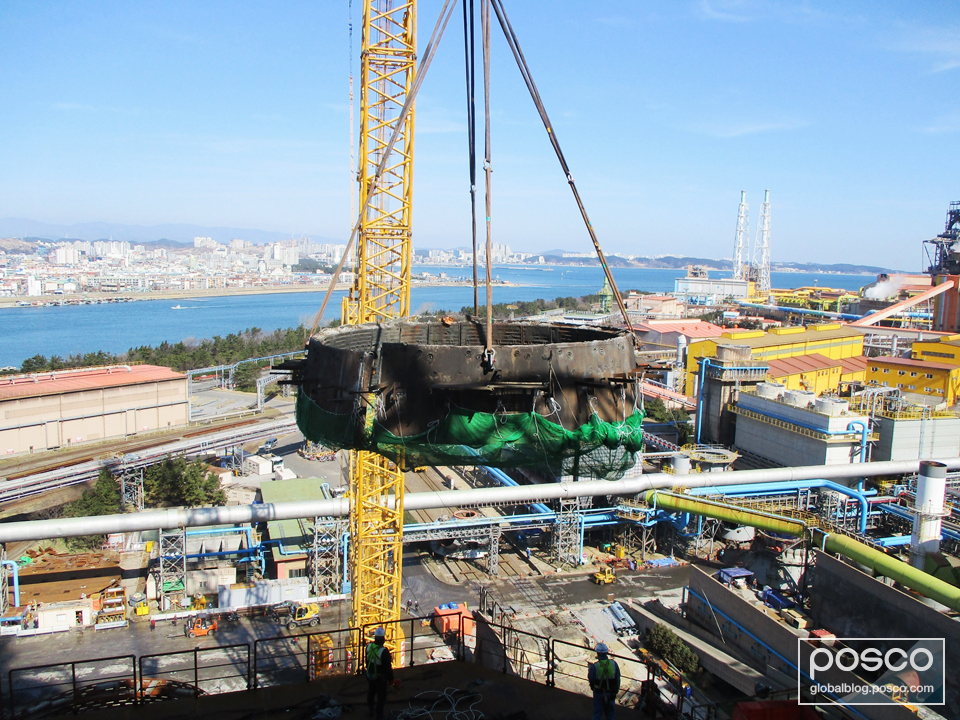 The Blast Furnace No.3 dismantled at the start of the repairing process

Engineers, including Gi Wan Son, Blast Furnace No.3 Repair Quality PJT team leader, worked on all three renovations and provided exceptional knowledge based on more than 40 years of experience with the Blast Furnace No.3. According to Son, the main focus was to build a smart technology infrastructure that utilizes AI and collects big data.

POSCO added smart sensors that automatically monitor the internal state of the blast furnace such as raw material quality and ventilator status. Both measures are expected to help forecast and extend the lifespan of the blast furnace to longer than the average period of 15 years.

Though in its early stages, AI has already had a significant impact on smart factories and further innovations are expected. The manufacturing industry needs to pay close attention to the future scope of AI development and how it will allow them to overcome existing challenges and open doors to a limitless future.

Don’t miss any of the exciting stories from The Steel Wire – subscribe via email today.