On the 14th, POSCO Chemical held the completion ceremony of a 25,000 ton per year production line at the cathode material plant 2 near Gwangyang Works, South Korea. With this, POSCO Chemical has significantly increased its production capacity at its Gwangyang plant from 5,000 tons a year to 30,000 tons a year. Including its Gumi plant and its Chinese plant (ZPHE), it will secure a cathode material production capacity of 44,000 tons per year.

POSCO Chemical is also focusing on the production of anode materials, having completed the construction of the second anode material factory in Sejong at the end of 2019. As to respond to demands for secondary battery material, the company is expanding the anode production system, which currently amounts to 44,000 tons per year. POSCO Group has been prioritizing the development of core materials for secondary battery for the past few years. POSCO Newsroom presents to you the details.

l What Does the Secondary Battery Material Business Mean for POSCO Group?

POSCO Group has identified the secondary battery material business as a new growth engine. In November 2018, POSCO Group set the proportion of overall sales in the Steel, Global & Infra, and New Growth sectors at 40, 40, and 20 respectively, and is to be carried out until 2030. As for the New Growth sector, POSCO’s secondary battery material business aims to obtain 20% of the global market share and expand sales to 17 trillion KRW by 2030. The advancement of the new business is expected to drive the group’s overall growth.

The secondary battery consists of four materials: cathode, anode, electrolytes and separator. Among them, POSCO Group is currently producing cathode and anode materials, as well as lithium, which is a raw material of cathode. Why has steelmaker POSCO and its affiliates joined the secondary battery material business? There are three main reasons for this.

The first reason is the significant change in the industrial environment. Demand for secondary battery materials is continuing to increase owing to the rapid growth of eco-friendly mobility business and energy storage systems. Electric vehicles (EV) are in the center of these changes. 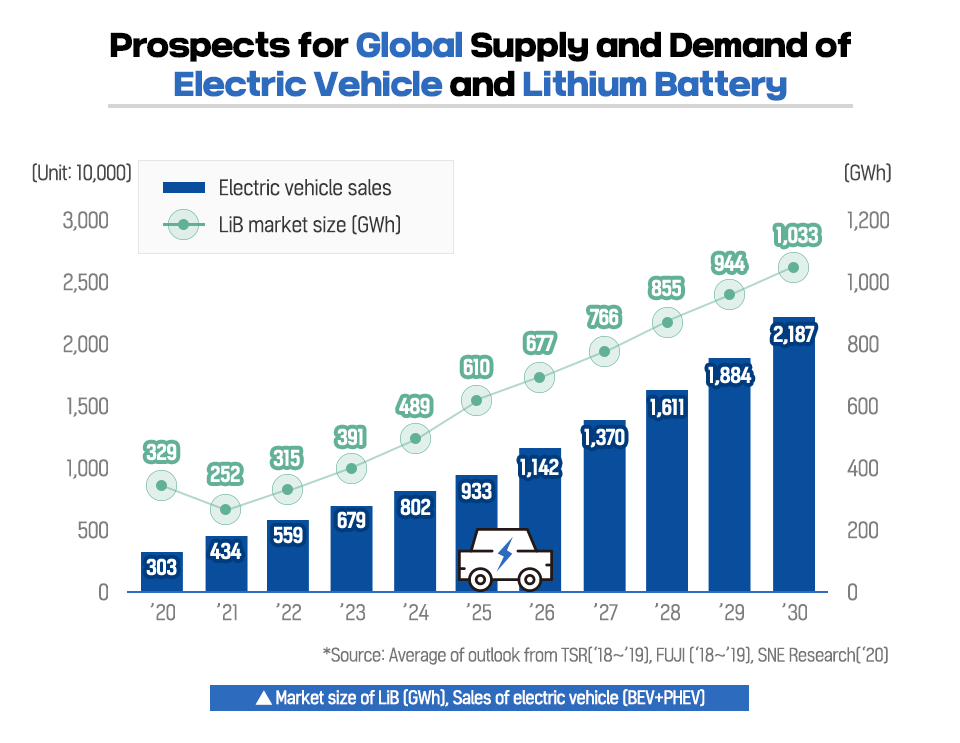 Major research institutes revealed that the global electric vehicle market and the LiB (Lithium-ion Battery) market — LiB being one of the most typical forms of secondary batteries — is expected to grow rapidly. The global electric vehicle market, on the basis of BEVs and PHEVs, will see a boost in its sales from 3 million in 2020 to 9 million in 2025. The LiB market size will also expand considerably, recording a growth rate of more than 22% per year (from 329 GWh in 2020 to 610 GWh in 2025).

The advancement of the electric vehicle market is estimated to drive growth in the secondary battery market as well. By 2030, the market will expand 3.2 times in comparison to the present market, which will also trigger the cathode, anode material, and lithium market. These changes in the market are a good opportunity for POSCO Group to demonstrate its capabilities since POSCO has a strong understanding of the automotive industry with its experience of supplying steel products to global automakers.

The second reason is that POSCO has been handling numerous raw materials and subsidiary materials needed for the steelmaking process, including iron ore, coal, nickel, chromium, and manganese. Given that resources are scarce in South Korea, this experience is crucial and directly connected to securing materials required for producing secondary battery materials.

Finally, POSCO has the capability to expand the material business, utilizing various process technologies and by-products that are generated in the steel making value chain. The production of synthetic graphite is one such example. Coal tar is a by-product created while making cokes in POSCO Steelworks. PMC Tech, an affiliate of POSCO Chemical, processes this coal tar into needle cokes, with which POSCO Chemical in turn produces synthetic graphite, a raw material for anode.

Then how is POSCO Group advancing into the secondary battery material business? The main business structure is as seen in the diagram below. 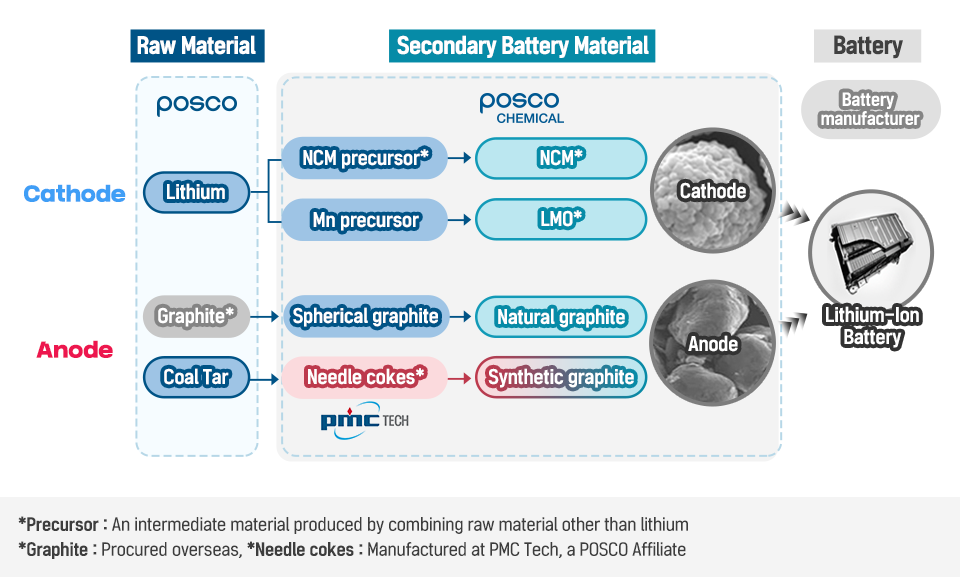 POSCO supplies lithium and coal tar, which are raw materials for cathode and anode materials. With the provided materials, POSCO Chemical produces cathode materials such as, NCM* (Nickel, Cobalt, Manganese) and LMO* (Lithium, Manganese, Oxide), as well as natural graphite, an anode material. The resulting cathode and anode materials are supplied to the battery manufacturer to make the final product — Lithium-ion battery. Initiating this year, POSCO plans to expand the business into producing synthetic graphite by utilizing needle cokes produced by PMC Tech, a group affiliate.

(1) POSCO – Securing and manufacturing raw materials of ‘lithium’
POSCO has POSLX (POSCO Lithium eXtraction) technology, a unique lithium extraction technology. PosLX technology utilizes ore and brine to make battery-grade lithium. POSCO was the first company in Korea to produce lithium carbonate and lithium hydroxide in 2017 and 2018, respectively. POSCO’s endeavor to secure overseas raw materials continued, and as a result, it signed a long-term contract with lithium producer Pilbara Minerals in Australia to purchase lithium concentrate, the annual production capacity from which is projected at 40,000 tons. POSCO also signed a contract with Galaxy Resources Limited and acquired mining rights at Hombre Muerto Salt Lake in Argentina.

Once the lithium ore plant in Gwangyang and the saltwater lithium plant in Argentina are completed in 2022 and 2023, respectively, POSCO estimates to spearhead the per-year production capacity of lithium hydroxide to 65,000 tons. The new system is to supply materials to POSCO Chemical in a more stable manner.

For cathode materials, POSCO has an overall yearly production capacity of 44,000 tons at a group level — Gumi plant (9,000 tons), Gwangyang plant (30,000 tons), and ZPHE in China (5,000 tons). ZPHE (standing for Zhejiang POSCO-HUAYOU ESM) is a joint venture with China’s Huayou Cobalt Co., Ltd., the world’s largest cobalt producer. Gwangyang plant specializes in manufacturing products for electric vehicles, and as a measure to meet market demand, the plant is to increase production capacity to 90,000 tons per year in the future. This amount enables the production of up to 750,000 electric vehicles, given that each vehicle can travel 500 km for a single charge. The cathode materials produced at Gwangyang plant are supplied to multiple electric vehicle battery production lines located in Korea, Europe, China, and the U.S. 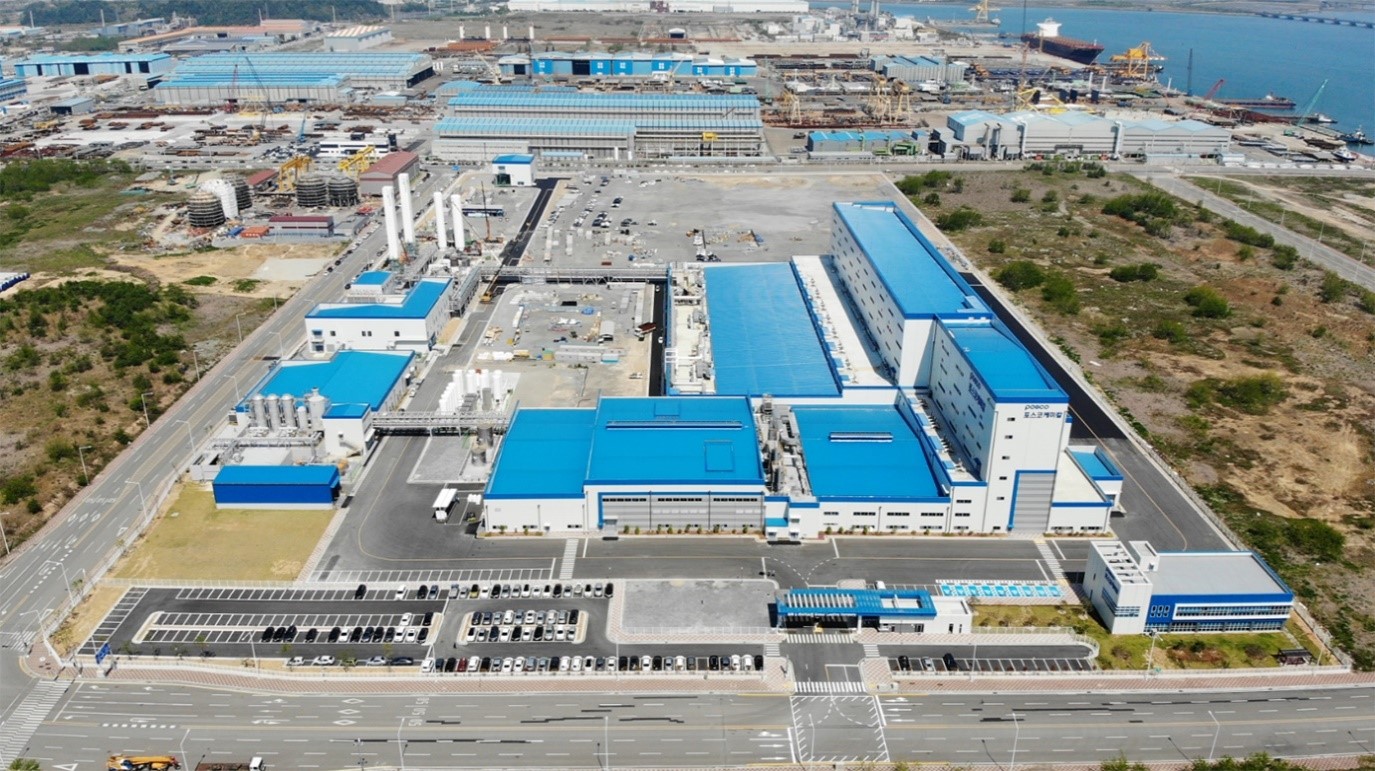 The Gwangyang cathode material plant, which was completed on May 14, has adopted POSCO Group’s state-of-the-art Smart Factory technology. The technology enables automatic transportation of raw materials, precursors, half-finished products, and end products, as well as an integrated control center in charge of the automated warehouse, product design, process management, and shipping. This accomplishment has helped secure competitiveness by improving productivity and stabling quality control.

The improvement of secondary batteries is crucial in the advancement of electric vehicles. As this is directly related to better mileage, the demand for high-capacity cathode materials that have a high proportion of nickel is becoming increasingly high. For this reason, POSCO Chemical is currently focusing on the mass-production of cathode materials with nickel proportion of 65% and also developing materials that are more than 90% nickel-based.

As for anode materials, the company has enabled the production of natural graphite, an anode material, by establishing facilities at the Sejong plant no.2 last year. This achievement is to facilitate annual production of 44,000 tons, ranking high amongst global producers. The company plans to make efforts to broaden the product line and build another plant in Pohang to manufacture synthetic graphite. POSCO Chemical is innovating into a ‘Total Supplier’ of secondary battery materials by producing both cathode and anode materials and is taking its place firmly in the electric vehicle market.

(3) Cooperating on R&D projects with RIST & POSTECH
POSCO is working closely with RIST and POSTECH to strengthen its competitive edge in R&D for secondary battery materials. The group’s secondary battery material research center, which was established in June last year, is developing next-generation cathode and anode materials as an effort to improve the performance of electric vehicles. Devising new process technologies that can help maintain cost competitiveness in the battery market is also another main task of the research center. By evaluating secondary battery performance through its unique infrastructure, the research center has been providing batteries that are manufactured with self-produced cathode and anode materials for various customers and tasks. 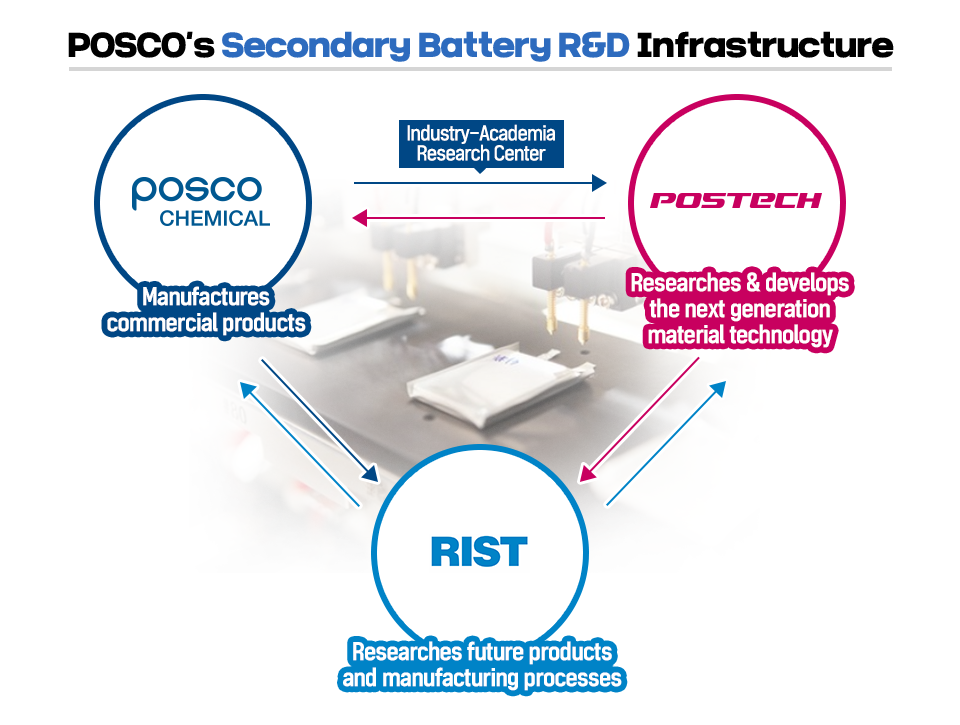 In May 2019, POSTECH established an ‘Industrial-Academia Research Center’ with POSCO Chemical to strengthen industry-academia cooperation through joint research in the three following fields: secondary battery materials, carbon materials, and chemical materials. The center also aims to foster professionals of each area by utilizing scholarship and dispatch programs. The first phase of the cooperation between POSCO Chemical and POSTECH, is to be carried out until May 2024. Main tasks include developing high-performance cathode and anode materials, and new premium activated carbon materials.

The secondary battery material business has definitely taken its place as POSCO’s new growth engine. The past decade is full of the company’s endeavor, and more are expected as the business is set to serve as the driving force of POSCO in the next 50 years to come.

*Related article: Everything You Always Wanted to Know About Secondary Batteries