[worldsteel] Museum of the Future Pushes the Boundaries of Aesthetic Design

Have you ever wondered how architecture or buildings would look like in the future when you were a child? The topic might seem like something that would turn up in a science class or an art class at school. However, it’s a theme that many still fantasize about, and this is apparent in the numerous science fiction movies and the many experimental architectures that we see today.

Dubai’s new Museum of the Future is one such experiment. Planned to be completed in 2021, the 78 m tall architecture demonstrates a unique shape and innovative design. It is expected to emerge as another Landmark of Dubai with its outstanding features and LED lighting reaching 14 km.

A steel framework was crucial in realizing the distinctive torus design since steel has both the strength to withstand the weight and also the flexibility which enables the required curvy structure. Dive deep into the story of this steel beauty as POSCO Newsroom presents worldsteel, “Museum of the Future Pushes the Boundaries of Aesthetic Design.”

One of the most challenging and unique building projects in the world, Dubai’s Museum of the Future is a true architectural experiment.

The architectural world is littered with hyperbole. While some claims may rely on poetic license, the uniqueness of Dubai’s new Museum of the Future is factually correct, its extraordinary form made possible by its steel superstructure and façade.

The elliptical ‘torus’ design covered in Arabic calligraphy was conceived by architect Shaun Killa of Killa Design, winners of the museum’s design competition in 2015. Killa is no stranger to challenging buildings; while at Atkins Dubai he worked on Burj Al Arab, one of the world’s tallest hotels. With his six-year-old architectural practice, he’s also responsible for Dubai’s twin 77-storey Address Jumeirah Gate, another project with iconic potential.

When it is completed in 2021, the 78m-tall Museum of the Future will be a showcase for innovation and technology, so its futuristic shape is fitting. The initial inspiration for the building, “was to create a form that represents the client’s vision of the future”, explains Killa, “where the physical building with its exhibition floors represents our understanding of the ‘future’ as we know it today and for the next five to 10 years.” Meanwhile the void at the building’s centre represents everything that is as yet unknown, the future. 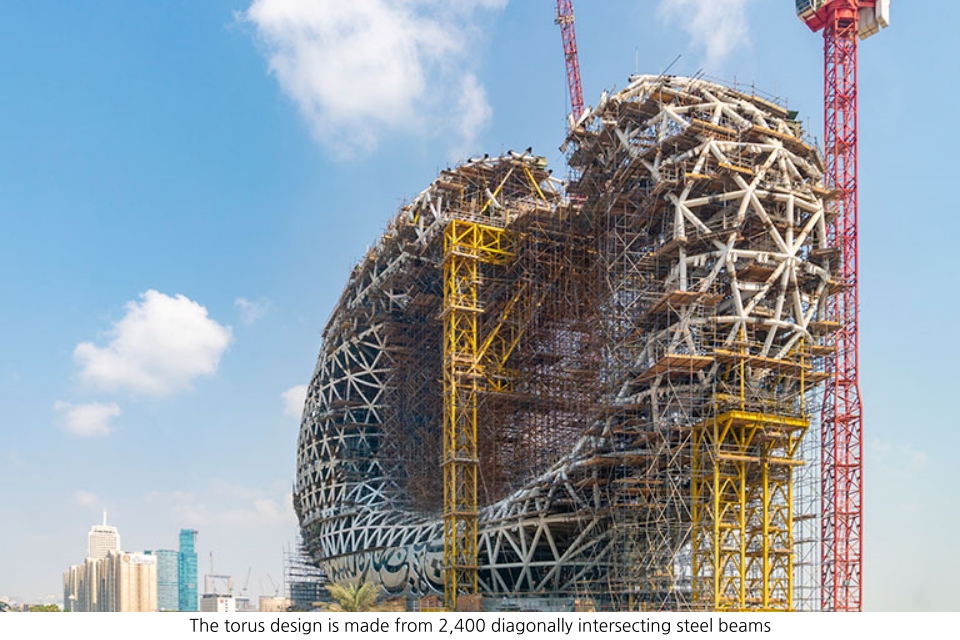 The architects designed the museum in three main parts: the green mound (which doubles as a landscaped three-storey podium), the building on top, and the void within. Inside, it will house six column-free exhibition floors and one floor of administration above the podium, and a food and beverage deck, along with auditorium, retail, parking and services.

“The Museum of the Future represents a radical alternative to the traditional skyscraper form.” – BuroHappold Engineering

UK firm BuroHappold Engineering was brought in to execute Killa’s ambitious vision. “Translating the design’s artistic and metaphorical concepts into a 30,000m² building clad in stainless steel was always going to be a challenge,” admit the engineers.

“But add to that the museum’s unique shape, the client’s desire to attain LEED Platinum status, and the team’s determination to embrace Building Information Modelling (BIM) at every stage of design and construction, then clearly, the building’s centre void is not the only aspect of this project that represents a step into the unknown.”

l Ahead of the Curve

BuroHappold started by fine-tuning the theoretical shape of the building to remove as many of its complicated curves as possible, which in turn would make its construction more straight-forward.

Then the steel framework and the lightweight façade were designed. The framework is a diagrid made up of 2,400 diagonally intersecting steel beams. As lead consultant on the project, BuroHappold relied heavily on parametric design as well as BIM. As the possible permutations for the diagrid were infinite, BuroHappold wrote its own growth algorithm to arrive at the most suitable arrangement for the structure.

The engineers employed parametric scripting in the design phase, utilising computer programming to define architectural form. The parametric aspects allowed the creation of dynamic links between parameters, enabling real-time, continuous modification of the design. This was a painstaking process, but as a result of this exacting computer modelling, all the steel tubes were able to be designed at exactly the same diameter.

This uniform diameter made construction significantly faster and simpler. Once the reinforced concrete ring beam and tower which support the diagrid were built, the steel work was completed in a mere 14 months. 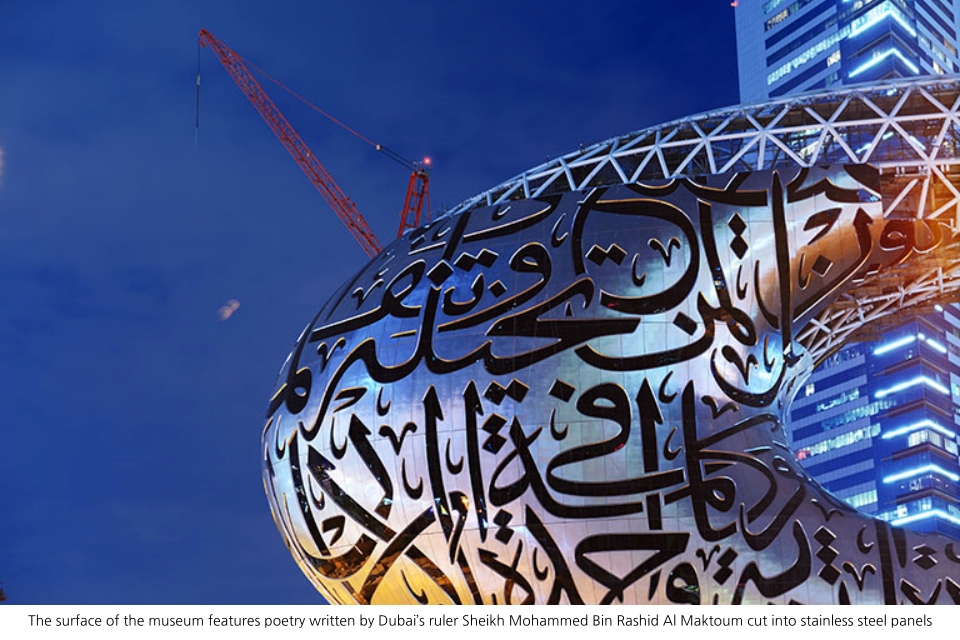 The thousands of interlocking steel triangles were produced by 3D printers. Cut out of these panels are phrases of poetry written by Dubai’s ruler Sheikh Mohammed Bin Rashid Al Maktoum, who is also the vice president and prime minister of the United Arab Emirates. The cursive scripts also act as the museum’s windows, and will be lit up after dark by 14km of LED lighting.

Now in its final phases, the $136m MOTF is positioned above the city’s elevated, driverless metro system on the edge of the financial district. It stands in the Emirates Towers area near Sheikh Zayed Road – the road on which Killa Design has its offices.

Its opening is due to coincide with Dubai’s hosting of the World Expo in October 2021, and the museum’s founders hope to attract more than 1m visitors a year, with half of those coming from outside the UAE.

For BuroHappold, “the Museum of the Future represents a radical alternative to the traditional skyscraper form.” And because of its complexity and unusual shape, the steel framework – rather than a concrete or steel shell – was seen as the best solution.

The original content published on the worldsteel’s ‘Our Stories’ section is available at : https://stories.worldsteel.org/construction-building/museum-of-the-future-aesthetic-design-torus-poetry/